I haven’t touched Halo in years. Halo 4 didn’t do it for me and I never had an Xbox One, so the last time I spent any serious amount of time on this series would have been in the Halo: Reach days; the days before I left home and moved to London, away from my family, friends and everyone I knew. Since then, my life has had a very clear split.

Since moving to London - the years AL - it’s been software engineering, poetry, the games industry, paying bills, desperately trying to work out what the hell my opinions are and working out why the smell of damp in the bathroom won’t go away. AL stands for After London, but it could also stand for Adult Life.

Before London it was books, dreams of being a musician, family, Northern Ireland, school, God. Childhood. A sense of safety. Importantly, Halo.

Halo was the game around which my social life was structured. I’d play every single evening with Zach, Daniel and Ridwan. There were a bunch of others who would drop in from time to time, but the core group was C69, E12, C05 and Z24. We called ourselves Falls’ Fantabulous Flying Four and, at least in my memory, we were good. Halo was the first game whose multiplayer I fell into and it would take years for Destiny 2 to launch and for me to find that again.

We spent our evenings playing Halo. We spent school breaks and lunchtimes talking about Halo. When Reach came out, Zach sewed the patch that came with it onto his jacket. We referred to each other by our in-game ranks (I made Major) and we were only half joking. A weekend social activity might consist of going to someone’s house, drinking far too many fizzy drinks and playing Halo. Those times we put the effort in to bring Xboxes together for System Link are treasured memories indeed. 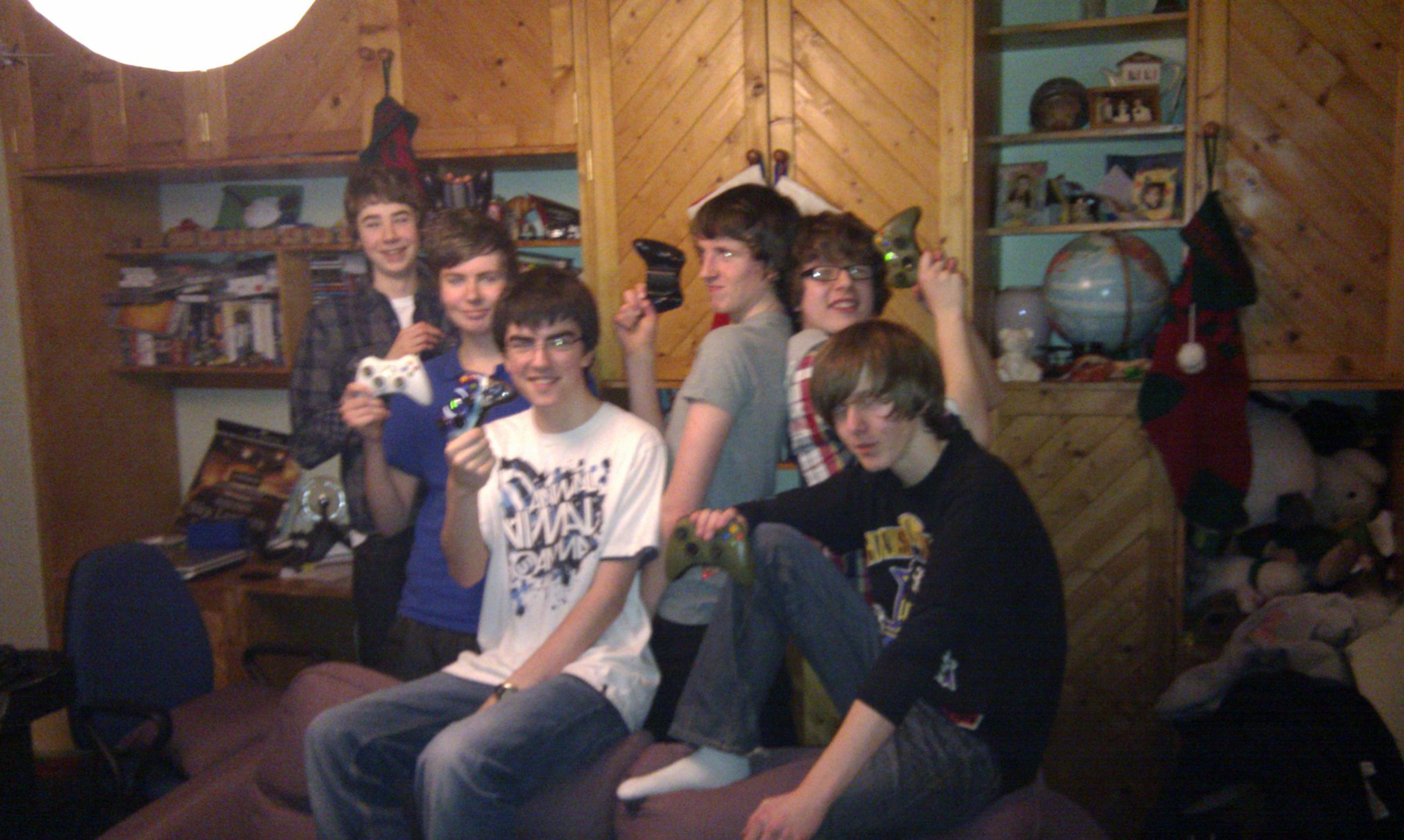 This isn’t even the same group of friends. This was just my life.

Around the time ODST came out, Falls, our glorious leader, became obsessed with acquiring all the Vidmaster achievements, which would apparently grant us the elusive-to-the-point-of-myth Recon armour. I can’t remember how many we ended up getting, but two stick out to me.

The first, Endure, was one we never finished. It required you to pass the fourth set on Firefight, Halo ODST’s horde mode, on the Heroic difficulty setting. We made many, many attempts. We had power outages. We had me go to bed leaving a hastily scrawled sign saying “Endure in progress, DO NOT SWITCH OFF” in front of the Xbox. On one occasion we were in the very last stretch and it was just me, a gravity hammer, and one too many brutes.

We did manage to complete Annual. This required you to complete the final mission in Halo 3, in 4-player co-op, on the legendary difficulty, with the Iron skull on (one death = everyone dead) and everyone in Ghosts rather than the usual Warthog. We finished it despite an oft-recalled incident where my long-suffering mother managed to freeze our internet doing an online Tesco shop. For some reason the game entirely locked up, but we could still hear each other. Every network blip for the next several years would have the first troubleshooting step of “Joel, is your mum on Tesco?”.

Life started to get busier when I was 17. Many of my Halo friends left school, and without those lunchtime conversations the game didn’t have quite the same draw. Still, I played Reach a fair bit, and this became my main way to stay in touch with those people.

One weekend in the summer of 2012, before I moved away, Zach came round. We sat side by side and played through the Halo Reach campaign, start to finish. I remember us barely saying a word to each other. We didn’t need to. That was all the goodbye I needed.

I find nostalgia to be a curious and powerful force. Since I moved away I’ve been completely unable to play Halo. The sound of the main menu music is quite literally capable of reducing me to tears. Every time I visit home the temptation to dust off the 360 is there, but I can never quite bring myself to do it.

Today, I install MCC and load it up. A few tracks cycle as I explore the rabbit warren of menus, and then the one I’ve been waiting for arrives.

Suddenly, I’m 16 again. It’s a Sunday evening, I’ve just eaten toast with jam, and the Xbox headset is creating a line in my just-washed hair that will show up all day tomorrow. I’m not looking forward to school, but right now I’m playing the best game with my best friends and I am untouchable.

I go into the customisation menu and I choose the Recon armour. It feels right. Then I shoot Falls a message.

« Speed Up Catalina With This One Weird Tip! Notarizing Java applications on macOS »